Turn on suggestions
Auto-suggest helps you quickly narrow down your search results by suggesting possible matches as you type.
Showing results for
Show  only  | Search instead for
Did you mean:
Sign In
77
Online
5841
Members

Gartner EA - a week of GDPR, Gaucho and wicket keepers!

Gartner EA - a week of GDPR, Gaucho and wicket keepers!

A week on from a hugely successful Gartner EA Summit in a sweltering London, I wanted to take the opportunity to o 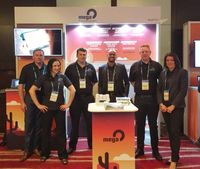 ffer a short summary of the event and reflect on a productive couple of days.

As Platinum sponsors at the event, MEGA had the luxury of being the very first booth in the Solution Showcase area of the beautiful Park Plaza Hotel conference centre – with views over the Thames and the Houses of Parliament it is a pretty special venue.

Conversations came thick and fast during the day, with people clearly concerned with the GDPR regulations and acknowledging that basic applications such as Excel and Visio, while useful, are quickly outgrown as an organisation scales its enterprise architecture practice.

‘GDPR from the inside’ presentation

At 16:30 on day one of the event, Gerry Rankin our advocate from the MEGA Associate Programme and formerly Chief Information Architect at British American Tobacco gave his views on the GDPR from the inside, and what the impending regulations mean for data governance in organisati

ons such as the global banking group he is currently working with.

Gerry’s presentation was packed to the rafters, with just under 200 people listening attentively and many visiting the MEGA booth afterwards to discuss their challenges further. The presentation is available to download from this post, and if you would like to discuss the aspects in which MEGA can help with GDPR preparedness please send me a direct message and I will arrange one of our team to contact you.

The GDPR from the inside de MEGA International

Throughout the event our ‘Magnificent 7’ themed booth led to some fun conversations, with lots of you recognising yourself as the safe pair of hands, the visionary or one of our other light-hearted persona traits.

One of the most amusing conversations I had was with a CIO from a large bank (I probably shouldn’t say more than that!), but he strolled up to our booth and said that the personas pretty much perfectly described his team to a tee! He particularly liked the risk officer as the persona as the safe pair of hands like a wicket keeper in cricket, not least because he actually played that position for his local team. The conversation then took a big tangent onto the upcoming England v South Africa test match, but that’s another story!

On the Wednesday evening (after the networking drinks!), the MEGA team were also fortunate to enjoy a delicious meal with a number of our existing clients and some new acquaintances we met during the day – it was all-in-all a very pleasant experience followed by a stroll along London’s beautiful South Bank to unwind and prepare for another packed day of conversations and meetings on the Thursday.

Last but not least, our solar charging devices proved highly popular throughout the whole event, so if you missed out on yours fear not – again simply send me a direct message and I will have one sent to you.

We hope you enjoyed the event as much as we did, and we look forward to talking to you very soon about the value that MEGA’s Gartner-leading HOPEX tool can add to the many exciting initiatives and projects that we touched upon during the event.